AUSTIN, Texas — Hot dogs were the main course when actor and comedian Bob Odenkirk and his son, Nate Odenkirk, hosted a SXSW feast for fans in the world of the new Audible Original, Summer in Argyle.

Guests were greeted by a 20-foot statue of Bob Odenkirk’s character, Jeremy Zax, on Rainey Street. They were then transported into Argyle’s DMV that doubles as the town’s fanciest restaurant — known to locals as Banger’s on Rainey Street. 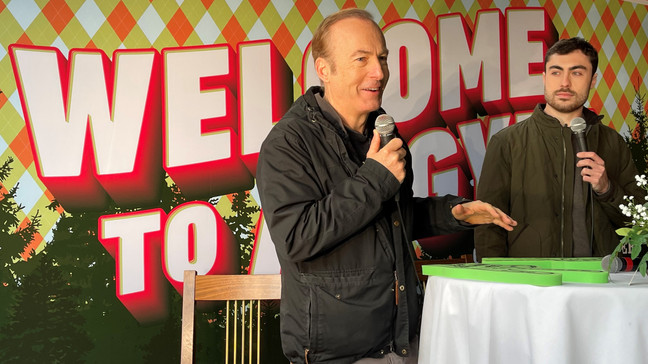 Hot dogs were the main course when Bob Odenkirk and his son, Nate Odenkirk, hosted a feast for fans in the world of the new Audible Original, Summer in Argyle. (Photo: Bettie Cross)

Created and written by Nate Odenkirk (The New Yorker, The Onion) and his father, Bob Odenkirk, (Better Call Saul, Breaking Bad, Nobody and Mr. Show), the scripted Audible Original podcast Summer In Argyle introduces listeners to Argyle, Ohio and a mysterious death at the town’s annual hot dog eating contest.

If you missed the multi-course fine dining experience at SXSW you can still grab a free bite when you spot Summer in Argyle hot dog carts rolling through downtown Austin.