Galardi has been promoted from president to president and CEO of the Irvine, Calif-based company

Galardi is the son of Wienerschnitzel founder John N. Galardi, and began his career as a janitor in the company before working his way up. He is replacing former CEO Cindy Galardi Culpepper, who will remain on as executive chairman of the board. 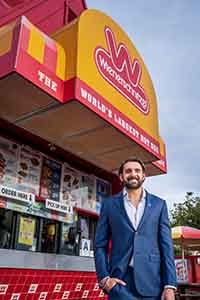 “Beyond being extremely dedicated to the success of our franchise partners and longevity of our brands, J.R. is a passionate visionary whose innovative ideas have already proven successful in bringing Galardi Group and our concepts into the future,” Galardi Culpepper said in a statement. “He’s extremely forward-thinking when it comes to strategizing for what’s next, but also has the self-assurance and determination to see his ideas through to the end. I have every confidence he will uphold his father’s vision to instill Wienerschnitzel’s place in the heart and minds of generations to come.”

As company president, Galardi helped the brands boost same-store sales by 42%, digital sales growth by 400% and signed new franchise agreements in the South and Northwestern markets in particular. He is also known for “successfully lowering the average age” of its patron, introducing a new generation to Wienerschnitzel’s hot dogs, chili dogs and corn dogs.

“I’m honored to continue my father’s legacy and have the opportunity to build upon the brand he created over 60 years ago in addition to the extended portfolio of concepts he believed in,” Galardi, president and CEO of Galardi Group Inc. said in a statement. “We say this is a family business, but that isn’t defined by name or relation; it’s an unwavering commitment to our extended family of franchise partners in providing them with the tools to thrive while also delivering a consistently enjoyable experience to our loyal guests.”

Moving forward Galardi hopes to open the company’s first locations outside the U.S. and invest in virtual restaurants and product licensing.